Every alternative history has its moment of deviation from the world we know. For The Upsilon Knot, the moment occurs in February 1687 when a small princess rallies and survives smallpox.  Eventually Anne Sophia inherits the throne of Great Britain from her mother, Queen Anne. (Click here for Upsilon Genealogy)

The ripples from this alternative succession include a different handling of the American colonies, fewer and looser ties with Germany and marriage between a Prince of Wales and the youngest daughter of Empress Maria-Teresa of Austria (a pretty little blonde known as Antoine).  There’s no American Revolution, and the French Revolution takes a while longer to come to a boil.  A brilliant and charismatic young Corsican named Buonaparte makes it his goal to unite Italy (along the way taking a bite out of Austria-Hungary) and gather up some of the Mediterranean territories of the ancient Roman Empire.

By 1887, the year in which The Upsilon Knot takes place, the map of Europe looks pretty much like this: 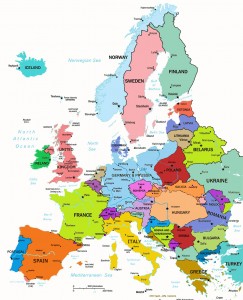 See the world of The Upsilon Knot with your own eyes!

Even with its differences, images from recorded history can still help you to visualize this world.
Follow me on Pinterest, or use the RSS feeds below to tap into a specific Pinterest board:

What the Women of The Upsilon Knot might have worn

Bits & Pieces from the world of The Upsilon Knot